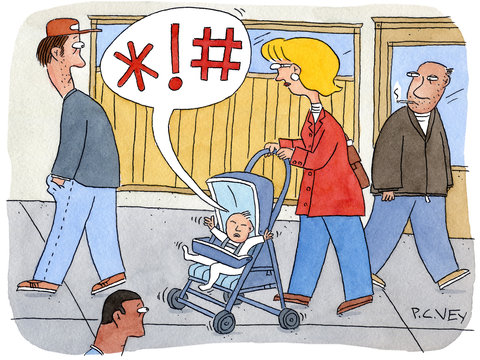 As a student and a teacher of language, I appreciate curses and other vulgarities: they can add color and emphasis to our vernacular. But like all stylistic flourishes, the audience has to be taken into consideration.

So here’s the current quandary. The distinction between where it is and is not appropriate to curse — and I am not just talking about calling upon the wrath of God here, but of the full canon of vulgarities and obscenities — has nearly vanished. There are apparently no rules. No curse-free zones (except maybe church, and one can only hope that is the case). People curse without consideration.

I hear it on the sidewalks, on the trains and on the buses, in restaurants and, of course, in bars, where a chorus of obscenities is unleashed by the great liberator of language: booze. In any location, it rarely matters who is in the immediate vicinity: a child or an older person or a teenager expanding his vocabulary.

The hallways where I teach run rampant with the four horsemen of the verbal apocalypse. Outside, it’s much worse. When the girls’ high school around the corner lets out, the streak of profanity is so constant and vicious it would make the Dice Man blush. The words of these young girls sting their classmates like slaps, and the boys, the wannabe tough guys, pepper their language with so much invective that it’s hard to follow. Not the most egregious or visceral, but arguably the most offensive proffers of profanity are the 20-somethings whose informal language consists of a liberal use of profanity blended into their OMG-juvenile act.

Is there a cure for this rampant vulgarity? When I was overheard using filthy language as a child, my mother would hook me in a hammerlock and shove a filmy white bar into my mouth. The lather accumulated on my tongue as shavings piled on my teeth and coated my gums. Afterward, I’d spend a good half-hour over the sink, rinsing and spitting in an attempt to regain a less aseptic taste on my tongue.

I doubt such a viscous solution would be acceptable in these permissive times, although there may be a ray of technological hope in our future. We may one day be a society that includes retirees with sagging tattoos and foul mouths who, having grown accustomed to sending texts of their profanities at work, will be cursing one another in initials that only their own generation can understand.

Andrew Cotto is a writer who lives in Carroll Gardens, Brooklyn, and teaches in Downtown Brooklyn.