How Gbenga Akinnagbe, Actor and Activist, Spends His Sundays 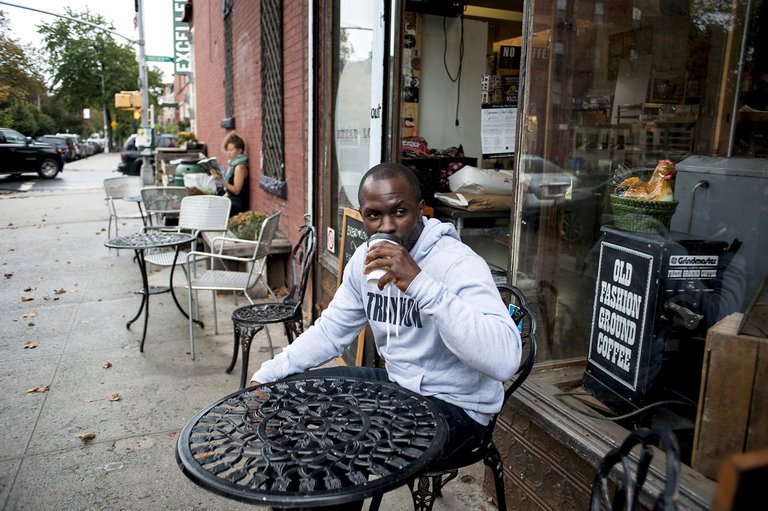 Gbenga Akinnagbe is a regular at Bread Love, a cafe in Bed-Stuy. Credit Christian Hansen for The New York Times

The actor, activist and entrepreneur Gbenga Akinnagbe (BENG-ga a-KEEN-na-begh) can currently be seen playing a pimp in “The Deuce,” HBO’s ode to Times Square in the 1970s and ’80s. But he might be best recognized, still, for his work in another HBO series, “The Wire,” where he played the right-hand man to a vicious drug dealer in Baltimore. When Mr. Akinnagbe, 38, a child of Nigerian immigrants, is not on set or traveling, he is committed to his activism and businesses, preferring to work on them in and around his brownstone in Bedford-Stuyvesant, Brooklyn.

UNPLUGGED Most days, I get up and get on the phone or get on the computer right away; on Sundays, though, I can’t let this be how I start my day. I’m trying to undo the mechanism in my brain that thinks that the world will fall apart if I don’t jump on everything all at once. It’s hard because New York rewards the hustle, and I love it; it’s infectious, and undoing the element of the hustle is very difficult. I have no idea where I’m going when I head out, and I go in whatever direction for what feels like an hour. 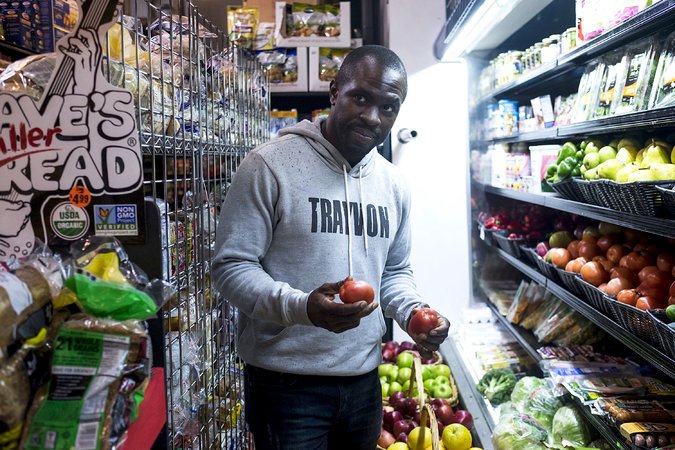 “I know people who grew up in this neighborhood who can’t afford to live here anymore,” Mr. Akinnagbe said. “And we’re a weaker community because of it.” Credit Christian Hansen for The New York Times

BUSINESS BREAKFAST I start to respond to the text messages and voice mails and emails. I always try to listen to “Wait, Wait…Don’t Tell Me!” on the weekends. I’ve grown fond of French toast made with croissants, but I’ve been trying to eat better, so I dip the croissants in egg whites, which is not so much better because it’s still a croissant, but I’ll put some fruit and yogurt on top.

MEETINGS, OUTREACH After breakfast, I have people coming by the house for meetings. I also have a lot projects in progress, including a multimedia cultural art installation in cooperation with the Weeksville Heritage Center that I’ve designed and curated; it’s a four-part project called “Africans in Brooklyn” taking place in the Kingsborough projects over in Crown Heights, so after breakfast, I go over there. Getting in that face time is important because I don’t want them to think some interlopers are coming into the neighborhood for whatever reason. 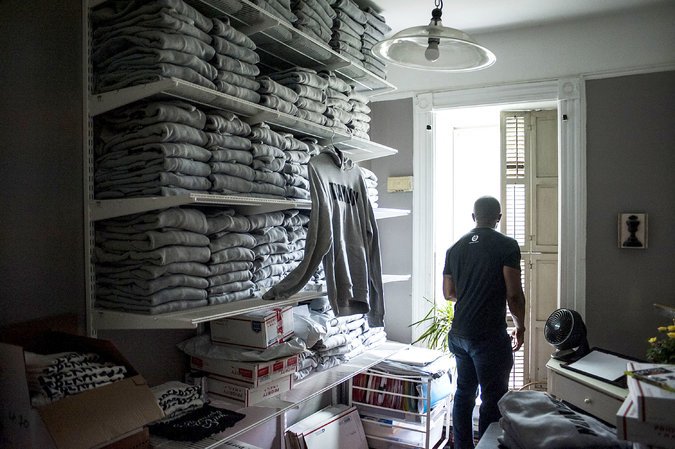 Liberated People, one of Mr. Akinnagbe’s companies, sells hoodies that raise money for the Trayvon Martin Foundation, as well as other items. Credit Christian Hansen for The New York Times

LUNCH I’ll take time to read a script or shoot an audition that I didn’t get to during the week. There’s a cafe I really dig called Bread Love, and the people who own it, Hillary and Lloyd, are dope; they’re community pillars who have done a lot of great things, so I’ll go there and catch up on politics of Bed-Stuy and cool cultural things happening around. It’s a great place to be as I have my waffles with jerk chicken sausage and a chai latte.

THE WORKOUT HAPPENS I’ll often look up the CrossFit workout of the day and do it at the gym or in the park. It reminds my body of wrestling practice, which I did in college, and I look for things that do that. Hot yoga does it, too, so I may do that instead. Depends on the day, but the workout happens. It has to. 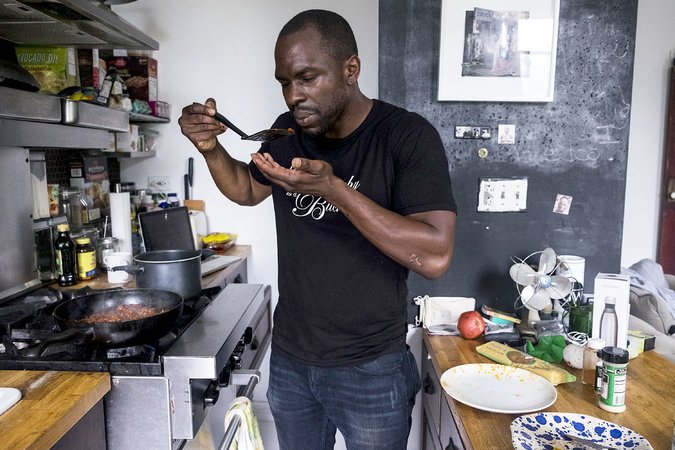 “I like to stay home for dinner and make a spaghetti sauce, a meat sauce, from scratch,” said Mr. Akinnagbe. “My sister made up the recipe. Mine’s not as good as hers.” Christian Hansen for The New York Times

JUGGLING My company, Liberated People, has a number of different items. Right now we’re doing three campaigns: the #oursontrayvon hoodie raising money for the Trayvon Martin Foundation; another is a partnership with Planned Parenthood, so we have a “Liberated Woman” T-shirt, and one is a T-shirt called “Patriarchy Is a Bitch” where we raise money for Black Women’s Blueprint. So a lot of my Sunday is juggling those campaigns.