How Johnny Temple, Book Publisher and Rocker, Spends His Sundays 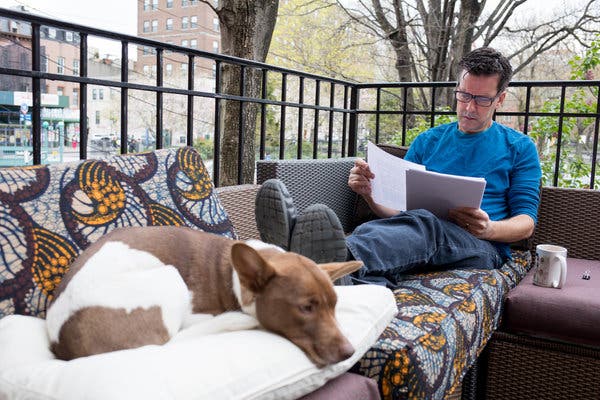 “The first sip of coffee as I begin to read is perhaps my favorite moment of the day,” Mr. Temple said.CreditJulius Constantine Motal for The New York Times

Johnny Temple is the publisher and editor in chief of Akashic Books and also plays bass guitar in three bands. He lives in Fort Greene, Brooklyn, with his wife, Kara Gilmour, 48, a senior director at Gibney Dance, a nonprofit, their two sons, Arthur, 12, and Abraham (Abie), 10, and a Basenji/cattle dog mix named Cuppy. “One of my goals in life is to leave Fort Greene as little as possible,” said Mr. Temple, 51, who has lived in the neighborhood since 1990.

THE RIGHT FOOT If I can’t start my Sunday with reading, my day gets off on the wrong foot. So, my Sundays begin almost precisely at 7:30 because that’s when my two sons are allowed a certain amount of screen time. When the coffee is ready, I bring a cup to my beautiful wife, Kara, in bed, and then I’m either reading or editing, mostly Akashic stuff, in a favorite chair in our kitchen or – the supreme place — outside on the deck. The first sip of coffee as I begin to read is perhaps my favorite moment of the day.

PURPLE PARK I take Cuppy to the park around the corner on South Oxford and Fulton that we call “purple park” where dogs are allowed off leash. I let her run around for a while, 30 minutes or so, and then head back home to find the boys.

BALL I love playing with kids; in fact, I like children more than I like grown-ups. Both boys are serious soccer players, but I love football, so we usually do one of those or both. I’ve actually been mistaken for a kid on playgrounds because of the way I behave.

BITES The boys and I will meet up with Kara and grab some lunch at Academy Restaurant on Lafayette Street or I’ll run down to Atlantic Terminal where Cesar’s Empanadas food truck on Hanson Place has what I believe are the best burritos in New York City.

TEAM SPIRIT Our weekends are structured around soccer; both boys play in select leagues. If it’s not a travel game, they are either at Brooklyn Bridge Park or Bushwick Inlet Park, or the Parade Grounds. I’m loud on the sidelines but less of an unwanted coach and more of a cheerleader. Occasionally my kids will tell me to shut up. I’m deeply invested in these games, and they impact my emotional livelihood.

MUSIC I make time at home to either listen to music or rehearse for any upcoming gigs with one of my bands. My best known band, Girls Against Boys, has had some shows of late, both in Europe and the U.S., and another band, Soulside, still regroups once in a while. I’m also in a new band, Fake Names, where every member is a well-known quantity in the underground rock world. If I’m not playing, I will spend time just listening. I’m in the process of rediscovering my vinyl collection.

DRINKS, WORDS Early in the evening, I like to meet for a drink with a writer friend, someone like Marlon James. I’ll invite whoever it is to the No. 7 Restaurant, nestled behind the subway stop, near my home. We’ll mostly talk personal stuff with maybe some business thrown in if they publish with Akashic. An IPA is usually what I’m drinking or maybe a bourbon on the rocks.

DINNER AND A MOVIE I’m home by 7, 7:30 for dinner, and most often my wife cooks. These days, watching a movie is very much something we might do after dinner. I was really happy when my boys moved past animated films, and I don’t mind showing them R-rated ones, so I’ve been exposing them to a lot of the comedians I grew up with, the Eddie Murphys of the world. We also just watched “School of Rock” which is one of my favorite rock ‘n’ roll movies since it really catches the spirit of making music.

DIFFERENT KINDS OF WORK It’s ironic that I, the publisher of “Go the _ to Sleep,” would have to wrestle his kids to bed, but even at this age, it can take a while for them to go down, though it’s not quite like it was when they were younger. After that, I’ll have about an hour or so to myself, so I’ll definitely sit down for some dedicated pre-Monday work.

SHOWS After that, I’d really like to watch “Game of Thrones” with my wife, but I just can’t stay awake that long, so I watch short Netflix shows, and I’ve just fallen in love with one called “Chewing Gum” that stars a young British woman named Michaela Coel, who writes the show as well, and she is, I believe, the funniest, smartest person on the planet. It’s like a one-woman show, and it’s mesmerizing and hilarious and one of the best things I’ve seen in a long time.