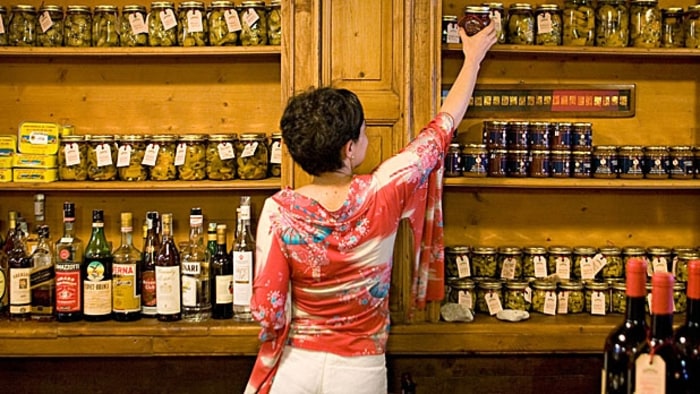 The Sant’Ambrogio neighborhood of Florence, a short walk from the historic center, is known for its quaint shops and quiet streets, as well as both an eponymous church and alfresco food market. It is also home to a cultural city-state of sorts that could easily be called “Cibreo-town.” The original Cibreo, an elegant and unique ristorante, opened in 1979 by charismatic chef Fabbio Picchi, is universally recognized as one of Florence’s finest dining spots. The Cibreo brand slowly expanded in its immediate vicinity to eventually include, a trattoria and caffe, and, perhaps, most curiously, a former convent converted into a “members only” cabaret-cafeteria-commissary known as Il Teatro del Sale (Salt Theater). The theater offers buffet-style meals, separately and modestly priced, for breakfast, lunch and dinner, the latter of which includes a show.

Picchi, with his tangled white hair and matching beard, resembles an anachronistic poet philosopher. His passion for life informs his sparkling eyes and flailing hands. It’s no wonder he married one of Europe’s most talented performers, Florentine comedienne/singer/dancer Maria Cassi, and soon opened Il Teatro with her in 2003 in a former convent right in the heart of Cibreo’s existing auspices.

“The ideal table of sharing for human beings is the stage,” says Picchi with a knowing nod and raised fingers pinched. Considering the owners’ respective vocations, it is fitting that there are two stages at Il Teatro del Sale.

To access the stages, though, one must first join the club. Annual membership comes with a nominal fee and the completion of a form distributed in the theater’s entrance corridor which functions also as a bon vivant’s paradise, with canned and jarred and vacuum-sealed delicacies racked on antique shelves above tabled books (many by Picchi himself), compact discs (including Ms. Cassi’s recordings), artwork, home décor and self-indulgence products like bath salts. There are even dress shirts and pants, designed in-house, for purchase off the rack along with a Picchi-designed chef’s jacket/sweater. The sophisticated-bohemian aesthetic and abundance of offerings warrants a flea market’s slow meander, but if there for dinner, one must enter the theater promptly at 7:30 for the respective performances.

The opening show involves a buffet dinner prepared by uniformed chefs in full view of the spacious kitchen partitioned behind painted-glass windows that flank the high-ceilings of the wood-adorned room. A massive wood burning stove is the kitchen’s main feature, which will be fed, over the course of a two hour meal with breads and seafood and meats (supplemented with many smaller dishes, such as soups and vegetable contorni, as well as dessert, made in the adjacent kitchen or one of the other Cibreo locations). With each course, a kitchen window swings open and a chef appears to announce the offerings with decidedly irreverent drama. The guests, seated at small or communal tables, rise to approach the serving banquet to receive their offerings. Finished plates are delivered by the guests to the dishwasher’s counter. The food selections are all seasonal, inventive Tuscan fare. A sample menu: Gurguglione (a spicy potato and mixed vegetable mash indigenous to the island of Elba), clam soup, roasted anchovies, turkey meatballs, Turmeric–coated chicken with sausage, potatoes and caramelized onions. Wine can be ordered from an impressive list or procured, for a flat fee, from the spigot of large wooden box housing fine Tuscan table wine.

Once dinner is complete, the tables are whisked away; the chairs are arranged in front of the stage that serves as the spacious room’s far quadrant. Acts are booked by Ms. Cassi and feature eclectic performers from a variety of mediums and genres. The star attraction, though, is Cassi herself, who frequently is on hand with her latest tour-de-force one-woman show. Thanks to her incomparable facial expressions and body contortions, Ms. Massi is commonly referred to as a comedienne. But beyond the laughs and vivacity, Ms. Massi’s most appropriate distinction would be that of a humanist, channeling life through impersonation and reflection.

The two shows — one culinary, one theatrical — are held every Tuesday through Saturday evening, and are now an inseparable part of “Cibreo-town,” the sleepy and ancient Florentine neighborhood that has become home to one of the most dynamic — and inclusive — clubs in the world.