My Gay Summer: Maybe We Are Moving Forward After All

Last Saturday, I walked out of a Fire Island Pines liquor store just as a friend was walking in. “Hello, handsome,” I said without pause.

My friend was less decorous.

“What the f*%k are you doing here?!?” He asked, his face flushed with wonder.

It was a legitimate question since The Pines is famously gay, and I’m neither famous nor gay; but, considering my summer so far, me in the company of gay men no longer seems wonder inducing to me.

My entire five weeks in Rome was like a very, very long weekend in Fire Island. Essentially all of my company was kept with gay men: dinners, parties, readings, travel. All gay. Almost all the time. I even lodged gay (staying in the apartment of a gay friend who lives in the palace of a gay prince).

This is not a coming out column, nor am I announcing some lame illumination about the dignity of gay men (OMG – They are people, too!). No, I’ve been down with all kinds of mankind for as long as I can remember. By nature and nurture, I’m a humanist. But as a middle-aged man in modern America, I’ve become a pessimist, too. Let’s face it: The world is collapsing. The destructive forces of ignorance, intolerance and greed have taken hold throughout the world and even (or, especially) in America where we have the framework to have buried such things long ago but failed to do so. Things are bleak. I worry all the time about the environment and the economy and the ability of government to ever function reasonably again. But the current status of gay men (and women) has given me hope.

While the world seems to have regressed in so many ways, the condition of gay men (and women) has progressed dramatically throughout the advanced world. My goodness: Cowboys can marry cowboys in Oklahoma! The changes have not just be legal but cultural, as well. Verbal gay bashing? So not cool. Just ask Alec Baldwin (though he may have been treated unfairly, it’s still a sign of how intolerant we’ve become of intolerance towards homosexuality). And as cynical as I’ve become about our leaders, the credit for much of the progress on equality for gay men and women comes from two very large international figures. 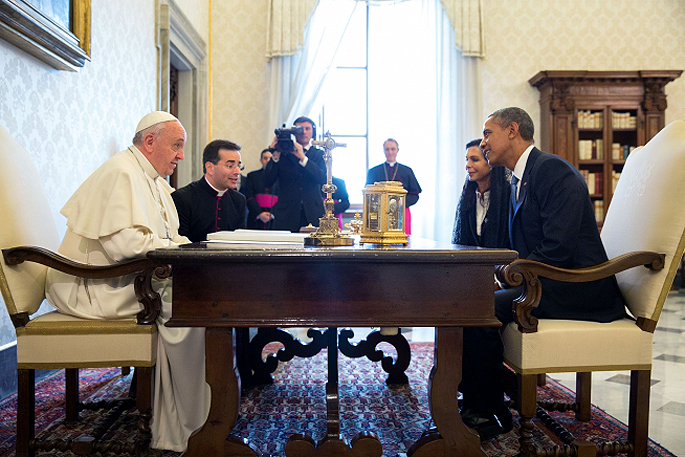 Pope Francis deserves an immense amount of credit and respect. His stance on homosexuality, as the leader of the Catholic church, is astonishing. You’d have to spend time among gay men in Rome to appreciate the courage behind such a position. Many fear for the Pope’s safety, recognizing the extremely powerful forces he has rankled on such a profound level. He has clearly put himself in very present danger, both professionally and personally, in order to advocate for justice and humanity. This is what true leaders of men do. Can you imagine an elected figure in America taking such an unpopular stance among their own ranks? I can.

President Obama may not have been as audacious as Pope Francis, but his reversal of position on gay marriage should not be discounted. By recognizing the dignity of the individuals in same sex couples, the President has allowed so many Americans, particularly African-Americans, the opportunity to be themselves without as much fear of recrimination. Look at all the professional athletes, and even some hip-hop artists, who have come out since the President’s announcement. Consider the difference in the cultural climate that informs the American conversation on this important matter of identity and respect that affects so many of our citizens. The President made it cool and proper to respect the individuality of an often-maligned minority population in America. Well done.

I’m not suggestion that Pope Francis and President Obama have ended homophobia, nor do I suggest they get all the credit for the progress, but they are clearly leaders whose courage has made a positive impact on the world. This is comforting. I can see the difference in the manner in which my gay friends live their lives. Having experienced real progress with regard to their identity, they are optimistic. And their “spring time” has added some much needed gaiety to what would have been an otherwise cynical summer for me.

Oh, and if you want to know what I was doing on Fire Island, read the Sunday Times on August 24th.

Published on 6sqft: My Gay Summer: Maybe We Are Moving Forward After All