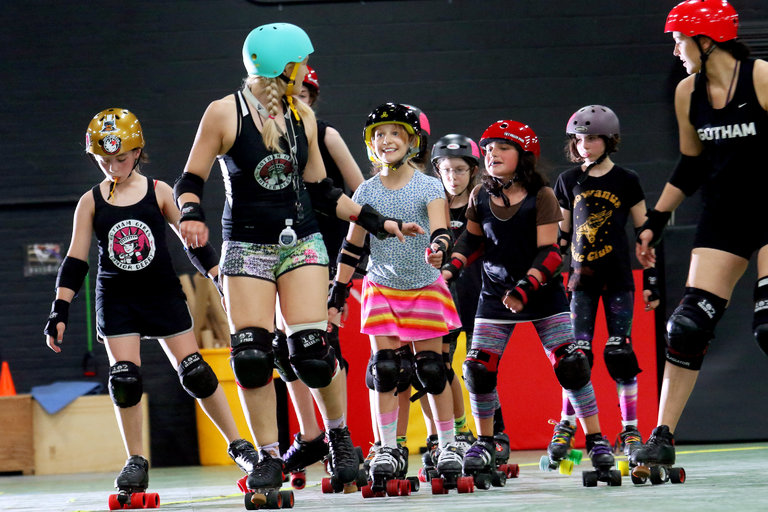 Blossom Bettles is 12 years old and lives on a tree-lined street in Brooklyn. Her father, who is British, is a photographer; her mother is a meditation and mindfulness teacher from New Zealand. She has a little brother named Sunny. Blossom is petite, with blue eyes and a dimpled smile, and wavy light-brown hair. Her name seems to suit her perfectly, until she straps on skates, dons her gear and becomes Dark Pixie, a fierce competitor in a gritty junior roller derby league in Bushwick.

Gotham Girls Roller Derby, a women’s organization with four competitive teams, serves as the sponsor for the junior league, which was created in 2012 for girls ages 8 to 17 to provide “a positive, empowering space for girls to learn, practice and play a contact sport,” said Tracey DeBenedictis, Gotham’s coaching director. The juniors do not compete for Gotham, but they skate in exhibition games, or “bouts,” at halftime in adult league competitions.

In keeping with roller derby tradition, the rockabilly, Rosie-the-Riveter, riot grrrl aesthetic is in full effect throughout the Gotham organization, from the tattoos and piercings to the fishnets and tutus. And, of course, there are the irreverent skater names, like Smacklemore and Evilicious.

But at the heart of the sport is a gracious and openhearted feminist ethos, wrapped in wrist guards by loving hands. And this is particularly evident in Gotham’s junior league.

“Without Gotham Girls Junior Derby, I have no doubt that I would not have finished high school,” said Joanna Acevedo, also known as Mercy Killer, who is now 19. “Roller derby has been a constant in my life, giving focus to what would otherwise be a very scary, uncertain time.”

Ms. Acevedo, now a college student, rose up through the junior ranks. She discovered roller derby in 2012 after attending a bout and decided to join on the spot, without ever having been on skates.

Ms. Acevedo dedicates her weekends to helping the current juniors, who practice for three hours on Saturdays at Gotham’s “crash pad,” a 10,000-square-foot former storage space in Bushwick. In the center of the “pad” is an uneven oval, the flat track, made of sport court, a hard plastic, with regulation markings. A disco ball dangles above. Along the periphery are training stations and some bleachers. An office by the entrance is painted blood-red. Illustrations and images of powerful women cover the walls. The space smells of sweat-soaked gear and is filled with the cacophony of wheels on flooring panels, stuttering stops that sound like rivet guns, and, of course, bodies hitting the ground.

“If you’re hurt, let me know,” one coach yells to a fallen skater. “If not, get back in line.”

The physical training is intense and demanding. One day this spring, about 10 skaters were practicing the techniques that allow each side’s primary skater, or jammer, to completely circle the track and score points — and techniques to stop her. Contact is inherent in the sport, and for some is its primary appeal.

Clare Higgins, 16, who was once known as Clare Beware but goes by her real name now, grew up on the Jersey Shore playing a variety of sports. She found her passion for roller derby in 2011 and joined the juniors two years ago. She commutes from Eatontown, N.J., about two hours away, for training sessions several times a week in addition to Saturdays.

“Roller derby has given me satisfaction like no other,” said Clare, who will travel to the Junior Olympics in Nebraska with a regional all-star team in July. “I can never go a day without thinking about it.”

Jatuan Flash, or Juggernaut Jatuan, 10, was never a fan of traditional sports, or sweating in general, but became interested in roller derby after seeing the 2009 film “Whip It,” about a misfit teenager who finds her identity through the sport.

“The movie made me feel like I would be really good at that sport because it was pretty much knocking people over on roller skates and I can knock people over, but what I really like is that I’ve made a lot of new friends and we all support each other,” Jatuan said. “It is my thing.”

This spirit of camaraderie and personal empowerment appeals to most of the participants, and gets many novices past their fear of the physically demanding sport.

“When I first walked into the roller derby area it was kind of intimidating,” said Blossom, um, Dark Pixie.

“There were girls hitting into each other aggressively and women skating backward and doing jumps,” she explained. “But now I love it! I love that one minute you can hit your friends off the track and onto the floor and the next you’re hugging each other and arranging sleepovers.”