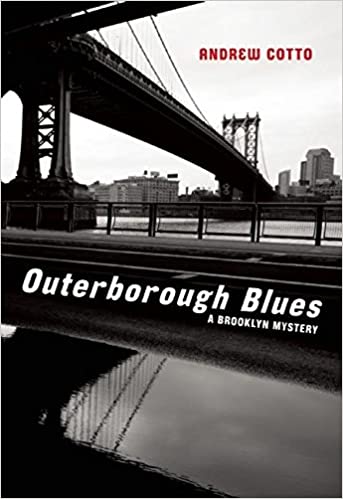 Outerborough Blues: A Brooklyn Mystery is an unconventional noir that takes place on the dawn of urban gentrification. Lyrical, atmospheric and brilliantly suspenseful, Outerborough Blues is the story of a drifter, Caesar Stiles, immersed in a mystery that takes him to the hidden corners of a rapidly changing Brooklyn.

The gritty search for a missing art student takes on a mythological sweep, in a gem-like construction, as Stiles has a single week to solve the case while reconciling his own inescapable past.

Elegiac and literary, Outerborough Blues: A Brooklyn Mystery pulses with the underbelly of Americana and the universal longing for home.

“At the beginning of Cotto’s cool, dark debut, bartender Caesar Stiles recounts how his Sicilian grandmother came to the New World with an Old World motive—“to murder the man that had left her for America.”…read more

KPD – “Found out about this book after having read another book written by Cotto, The Domino Effect. Having just finished reading Outerborough Blues, I can attest to the fact that Cotto’s ability to write in a descriptive manner allows the reader to be drawn into the book in a manner that makes the reader feel as if they’re witnessing the events within the book first-hand.”…read more